Is eating rotisserie chicken healthy? There are benefits but watch out

Rotisserie chicken is a type of grilled/barbecued chicken recipe that is cooked on a rotisserie where the chicken (already dressed) is placed near a sufficient heat source and it is cooked via direct heat radiation.

Chicken has lots of health benefits so eating it is good for you, but most rotisserie chickens, especially from large grocery stores like Costco, have been injected with fat and broth and are therefore very salty.

Let’s take a look at the pro’s and con’s of eating rotisserie chicken. 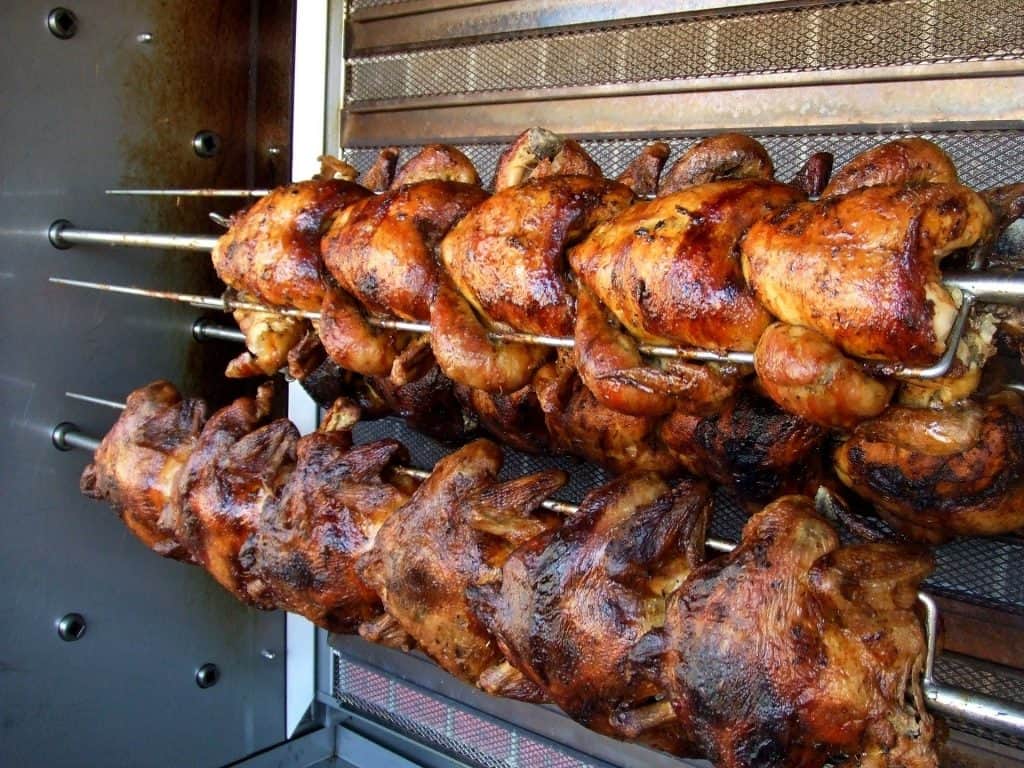 A rotisserie also known as spit-roasting, is just one of the many types of meat roasting where meat is skewered on a spit – a long commercial grade stainless steel – usually more than a meter long – used to keep meat suspended in midair while it is being roasted either on a campfire over a fireplace, or in a huge oven.

Typically gas or electric-powered heat source is used to cook the rotisserie chicken, but in rare cases, charcoal is also used.

These types of rotisseries have proven quite functional for cooking rotisserie-style chicken.

You can even make it yourself using these simple steps:

Also check out our article on the best BBQ’s with rotisserie attachments to get started yourself!

The best thing about rotisserie chicken is that its leftovers can still be used for a variety of dishes (i.e. soup, chicken salad, and sandwiches) after you’ve chomped down on its prime parts in the first serving.

Contrary to the common misconceptions rotisserie chicken actually has more nutritional benefits than a health risk, and like other kinds of chicken recipes, the rotisserie chicken is a healthier option compared to beef, sausage, or the lasagna.

However, you need to take extra measures when buying and cooking this kind of chicken in order to make certain that it’s safe to consume as contamination is a high probability when transporting rotisserie chicken from the supermarket/grocery store to your kitchen, and then your table.

According to the American Heart Association (AHA), it is better for Americans to eat more white chicken and fish meat as well as some beans, than red meat.

Rotisserie chicken provides a good amount of protein with fewer amounts of saturated fat and cholesterol, which red meat has a higher content of.

Moreover, chicken meat contains rich amounts of niacin and phosphorus plus small amounts of other minerals and also Vitamin B-12, which is part of the beneficial Vitamin B Complex.

It is also known to be a good source of nutrients such as:

Protein is an important nutrient that helps keep your energy at optimal levels and keeps your muscles and cells in prime condition.

For every 85 grams (3 ounces) of rotisserie breast meat has approximately 23.8 grams of protein in it, which is about half of the 46 grams RDA (recommended daily allowance) of protein for women to consume and about 43% of the 56 grams RDA that men are required to consume.

With the same amount of rotisserie breast, it has roughly 8.2 mg of niacin, which provides up to 59% of the total RDA consumption for women (14 mg), while in men this translates to 52% of the 16 mg RDA according to the Centers for Disease Control (CDC).

Among the many health benefits of niacin includes keeping your digestive system healthy as well as make your nerves and skin healthy also.

A University of Maryland study finds that there is approximately 205 mg of phosphorus in a rotisserie thigh, which provides 75% of the 700 mg RDA in order to keep a person’s bones and teeth healthy.

According to the USDA National Nutrient Database, all other parts of the rotisserie chicken contains iron, zinc, potassium and Vitamin B-12 in small amounts.

While there is no disputing that rotisserie chicken is healthy, the fact that it still has the chicken skin compared to the skinless chicken you buy at the grocery store, and the chicken skin still contains some fats, albeit fewer than a prime rib.

You can remove the chicken skin from the rotisserie chicken and other visible fat before serving it to your family and friends in order to mitigate the situation.

The AHA puts a daily protein intake limit up to 6 ounces a day and based on their research the typical rotisserie chicken breast contains 3 ounces of protein, so you’ll only need to consume 2 chicken breasts a day to get the RDA for the protein that your body needs.

You’ll also get 122 calories of energy from the same amount of breast meat in rotisserie chicken.

The same portion of chicken breast contains 3 grams of fat and the saturated fat is also just below 1 gram.

This serving size of the rotisserie chicken breast has approximately 73 mg of cholesterol as per the USDA National Nutrient Database.

The American Heart Association (AHA) says that this covers roughly 17% of the RDA for saturated fat (15 grams daily limit) for an average person on a 2,000-calorie diet.

Again the same serving size of that chicken thigh also has about 122 mg of cholesterol, which is approximately 40% of the 300 mg daily limit.

The average rotisserie chicken weighs about 2 lbs. and if you consume half of it each day – including parts like breast, thigh, and skin – then you will have consumed 96% of the daily intake limit of cholesterol, and 46% for sodium.

Tip on rotisserie chicken use

While rotisserie chicken is good for consumption as is, you can also use it as part of the ingredients of any recipe that requires chicken meat.

Since this type of chicken is already cooked, then you don’t have to put a lot of effort into making chicken enchiladas, chicken salad, chicken chili or chicken and pasta.

Disadvantages of chicken from the rotisserie

You may have noticed that rotisserie chicken tastes so good, well; the reason behind it is because they are injected with fat and broth during processing.

Unfortunately, this processing that the raw whole chickens go through also increases the amount of sodium in the meat (they also o this to whole turkeys).

Again the AHA recommends a daily limit of 2,300 mg of sodium per day (1,300 mg per day for people with the age of 30 and above) because going beyond this limit will also increase your risk of heart disease and high blood pressure.

Even though we’ve highlighted the rotisserie chicken’s health benefits, it may be good to only consume less than half a pound of it per day (skip eating it in the weekends).

If you want the smokey taste all-around your chicken, you can always use this beer can method

Make sure that you understand how bacteria like Salmonella accumulate in rotisserie chickens and keeping it hot at over 80 – 120˚ Celsius will prevent such accumulation.

And unless you use it or refrigerate it within 2 hours of purchase, do not eat or serve it to your guests after 6 hours has passed since you purchased it.

Like we’ve discussed above due to the processing that rotisserie chickens go through, they contain a high amount of sodium.

While the same amount of rotisserie thigh meat contains 318 of sodium.

It is better to eat roast or grilled chicken from your home than eating rotisserie chicken from the grocery store as it delivers the same amount of nutrients minus the sodium.

Also fun to watch is this video on “which grocery store has the best rotisserie chicken?”:

Rotisserie Chicken Across the World

Spit roasting has been practiced since ancient times going as far back as the time of the Babylonians in ancient Mesopotamia.

This simple yet efficient cooking method spread throughout the world before it became popular in the Caribbean Islands about a thousand years ago.

Later it also became popular in Asia, although the method is commonly referred to now as barbecue or grilling.

Also read: the best smoked meat comes from these BBQ smokers you can buy

In the United States, supermarkets and some butcher shops sell ready-to-eat rotisserie chickens in various quantities since the beginning of the 20th century.

But it wasn’t until the Boston Market helped popularize the selling of packaged rotisserie chickens in the early 1990s when this food became widely available.

Ever since that time rotisserie chickens became popular not just in the US, but also all over the world and it became a new recipe in and on itself.

The Food and Drug Administration (FDA) estimated that over 600 million rotisserie-cooked chickens were sold in the US back in 2010 in places like supermarkets, club stores, and similar retail outlets.

This increased by 35% in 2018 and the figure has become 900 million+ rotisserie chickens have been purchased by consumers.

Market experts give 2 most probable explanations why this phenomenon exists.

The first theory suggests that rotisserie chickens are being used as bait to lure customers into the grocery store and hope that they’ll buy more if the cooked chickens are sold at a lower price.

The proper term for such a market strategy is “loss leader” and it is quite effective at attracting customers, which is probably why rotisserie chickens are cheap.

The second theory states that raw chicken meat used to make rotisserie chickens are believed to be poultry that is due to reach its expiration date.

This sales method helps grocery stores still make a few percentages in profits (although not the projected sales figure), or break-even in their initial capital in purchasing raw poultry meat.

This is actually better than not making any profit from their investment at all.

Also read: this is how you reheat your rotisserie chicken the right way for leftover day

Typically the videos aired on their cable channel are raw whole chickens being cooked on rotating rotisserie.

Sometimes they also air a man wearing a costume that looks like a Chalet’s dipping sauce container while dancing to a tune made specifically for Swiss Chalet.

Historical records show that Napoleon Bonaparte loved rotisserie chickens and are often found in his diet.

Filipinos were quick to adapt the rotisserie chicken as their own and made several franchises that sell it exclusively.

They call their rotisserie chicken “lechon manok” which means, “roasted chicken,” or “chicken that’s been spit-roasted.”

The top 5 rotisserie chicken franchises in the Philippines are:

SLQ Lechon Manok’s unique chicken liver sauce makes the rotisserie chicken taste so much better and I highly recommend it!

Also read: these are the top models that Traeger grills has to offer

Hi, I'm Joost, the founder of Lakeside Smokers. I love trying out new food with BBQ Smoking (& Japanese BBQ!) at the heart of my passion, and I've been creating in-depth guides since 2016 to help you with recipes & cooking tips.